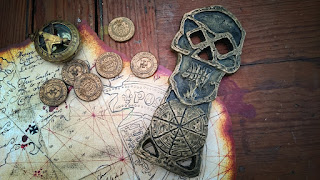 Something that I'm sure I have in common with many of you is that Goonies holds a special place in my heart. The kids, the bad guys, pirates, traps, gadgets and eventually the treasure... it's the perfect adventure and certainly a movie that I keep coming back to. As a quick side project to test some techniques I thought I'd sculpt up a version of the Copperbones...

I know there are a couple of members on the RPF who already produce some top quality versions of the Copperbones but I didn't want to be influenced by their works their works so it was time to gather some original reference.

I spent an enjoyable afternoon scanning through my goonies blu-ray trying to capture pictures of the prop from the movie but as it turns out you never get to see the Copperbones very clearly in the movie itself. 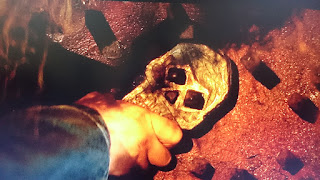 Since this was a bust I resorted to the 80's magazine article for the majority of my reference. 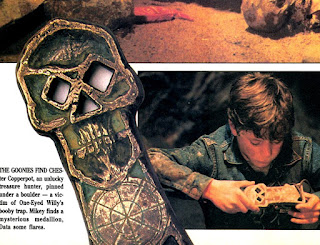 I started by rolling out a piece of Chavant Medium NSP. We've been having some particularly cold weather here and the plasteline was proving somewhat stiffer than usual so I had to use a fair bit of elbow grease to get to this stage. 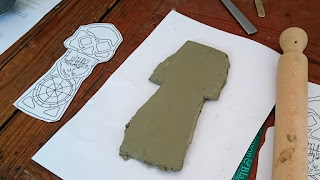 Once I'd got a flat piece of approximately the right size I stuck a rough sketch to it and used a sharp knife to trim out the shape. 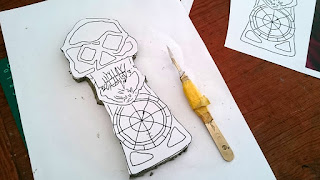 Using a scalpel I traced the lines through the paper and marked them into the clay below. 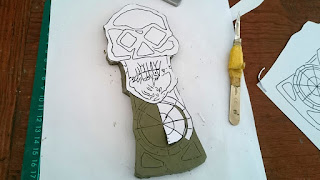 After carefully removing the paper I was left with the outlines scored into the clay. 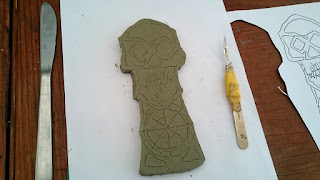 My clay sculpting tools were the next victim of the cold weather, unable to withstand the stresses involved in removing the chilled plasteline they started to fall apart on me! A bit of tape and we were back in business though.

I was careful to try to capture as much detail as possible. I exaggerated the depths slightly thinking that if I cold cast the piece I would have to rub it back to bring out the shine. 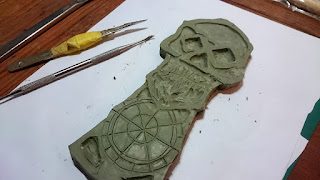 Over the course of about a week I made steady progress, slowly refining the sculpt. 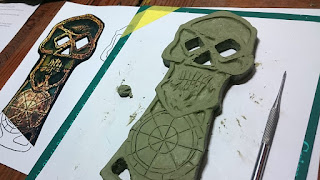 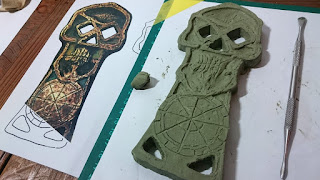 I re-sculpted the circle at the bottom a couple of times, keeping the lines clean was not easy. 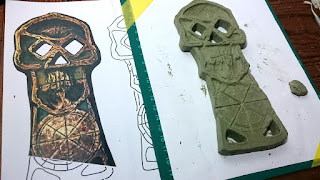 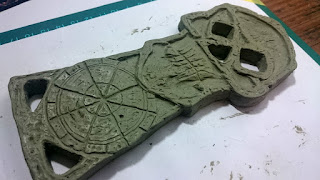 When it got to the point I was happy with it I built a mould box and dropped a load of silicone on the sculpt. I could have (and perhaps should have) spent a little more time setting this up but I was getting kinda impatient.

First pull from the mould was in a black resin. I didn't expect this to be any good, just wanted to clear the mould of any clay residue but was happily surprised with how it turned out.


Next pull was a lot cleaner. I'd mixed some brass powder in with the resin but the effect wasn't quite what I had in mind so I touched this cast up with some paint and rub'n'buff to replicate the appearance of the prop in the magazine.


The next attempt I mixed a load of copper powder into the resin. Once it was scrubbed with some wire wool to bring out the shine this looked kinda cool but again didn't have the depth of appearance I was looking for.

After a little googling I found that copper can be aged in numerous ways however a substance called Liver of Sulphur is particularly effective. "To Amazon!" I cried. Five days later a padded envelope arrived on my doorstep containing two little bottles. 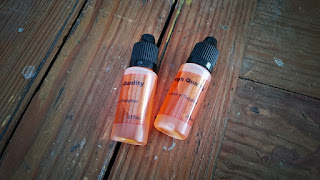 The instructions said to dilute five drops in a tub of warm water then submerge the object to be affected in the liquid. Gloves were to be worn and the process was best carried out outside the house as the smell of rotten eggs would be quite strong. They were not wrong.

I was a little disappointed at the lack of reaction that occurred, so being an impatient soul I sprinkled a few drops of the neat solution over the cast... 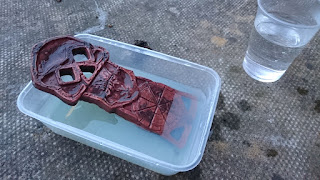 ... which turned instantly black wherever the liquid fell! I washed my creation down with copious amounts of clean water to halt the chemical reaction and blotted it dry with kitchen towels. 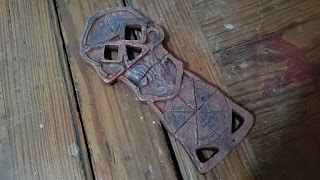 It certainly looked a lot more interesting than it had. A little light scrubbing with a wire brush helped bring back the shine to the areas that needed it. 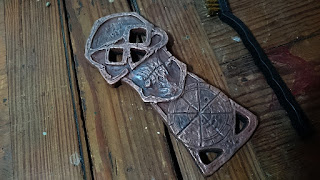 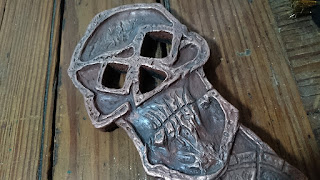 Still needs a bit of dirt rubbing over it perhaps but not too bad for now. I just need to get that map finished, maybe make up a doubloon... but that'll have to wait, I'm just starting another sculpt that I think you'll like, and there's some gold leafing that needs doing to complete another project... 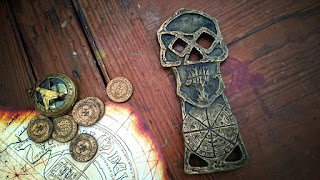