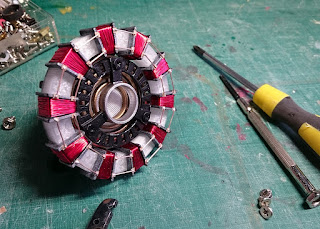 One of the first things I printed out when I got my Flashforge was Tony Stark's Arc Reactor (modelled by the extremely talented Skimbal). It's projects like this, with complex industrial shapes, where 3D printers really shine. Anyway, I've had the parts sitting around for a while now and when I found  I was at a lose end over the weekend I thought I'd finally put them together...

Although I printed these a while ago I thought I would start at the beginning.

Skimbal has set up his model for lighting and electronics which makes it a little bit larger than the movie scale prop. To bring it closer to the size of the arc reactor you see on screen I printed Skimbal's files at 69.5%. 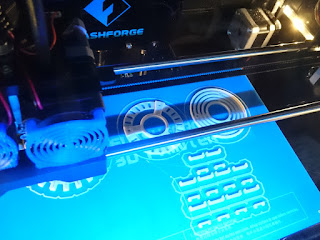 Simplify3D was used to slice the majority of the parts, although for some reason I could only get the support cage to slice correctly with RepG.


I really wanted the crystal elements to be transparent but didn't want to buy a kilo of ABS for one small project. Through Amazon I found a place willing to sell 10 metres of clear filament, almost exactly what I required to complete the transparent components for the build. Everything was printed in ABS at 10% infill.

I've got an old rice cooker I use for Acetone Vapour Smoothing. The results aren't perfect but it helps remove print lines from areas that would be difficult to sand.


The central grill was going to be right at the front of the model so I wanted this to be really smooth. I filled in any small holes with milliput before giving it a good sanding.

I coated everything with some grey plastic primer. This is the stage where you finally get to see how good your filling and sanding was.


Since I wanted to wrap wire around the small brackets the original slot-together construction method wasn't going to work for me. I decided to trim the tips off the prongs to make it fit.

Once I was happy with the finish I undercoated most of the pieces black. Obviously I left the clear parts unpainted.

After the undercoat had fully cured I masked the top grill with tape so I could spray the centre ring. This was given a good coat of Plasticoat chrome. The lower grill was dusted with gold. Not too much as I wanted to keep it fairly muted. 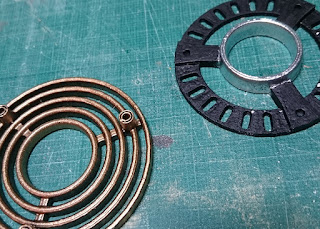 The brackets to go around the top were dry brushed with silver acrylic so they ended up looking like steel.

With a fine brush and some silver paint I created the appearance of chips and scratches in the black of the upper grill and the edges of the support cage. I made sure to keep looking at reference photos as I did this.

The painted brackets were slipped onto the outer ring and wrapped with about a metre of 26 gauge red beading wire each, taking care to tuck the ends out of the way.

For the central mesh I took some fine fabric netting that I had painted silver and attached this to the back of the lower grill with a dab of glue.

9) Assembly
I found some small screws to put into the top grill, then fused the two grills to each other with acetone. This assembly was then glued onto the central crystal. I put a screw through the back of the support cage into this crystal to help ensure the central unit stayed centred.

I then glued the outer ring onto the exposed arms of the support cage.

As a finishing touch I painted some paper with gold acrylic and sliced it into very small squares. These I superglued onto the edges of the brackets, then superglued small lengths of wire bridging the gaps between them.


The last thing I did was put a blob of silver paint on the end of each wire to simulate solder. I also decided the screw heads might look better in black.

And of course, why build one when you can build two at twice the cost? The one on the right is a bit rougher, like it might have been put together in a cave or something. 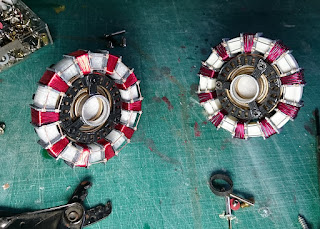 This was really fun and a nice break from other projects I'm working on at the moment that I'm designing from scratch. I'm delighted with the results and want to say a big thanks to Skimbal for putting the effort into designing this and then making the files available for free. I’ve got a bunch of micro LEDs on the way but I have no idea if I'll be able to fit them in the build anywhere, I will be certain to let you know if I do.
at September 21, 2015