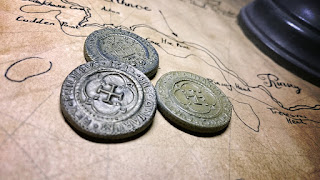 I've been involved in a pirate based project lately and I found myself needing a ready supply of Spanish Doubloons. It is possible to acquire replicas at a fairly reasonable price, but seeing as I didn't know how many I'd need I thought it might be fun to produce my own. I had to make them durable with a finish that wouldn't rub off so it seemed that cold casting was probably the best option...

First step as always is to take to the internet and do some research. Between the various coin collecting sites and eBay there is a wealth of information on historic coinage. The doubloons I wanted to reproduce would be loosely based on the Spanish Eight Escudo as pictured here: 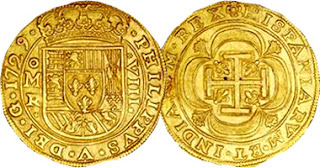 The initial design I sculpted in a soft material in negative. I went with Fimo, thinking that if i needed to I could bake the mould to make it solid. In the end I decided against this is as it was useful to be able to adjust the design. Rather than attempt to make a double sided mould I created the two sides separately.

I then used a pen lid to mark a circle in the centre of the design and started sculpting with a fine pointed tool. For very fine work and to sharpen the serifs on the lettering I used a pin.

Tips: Don't go too deep with any of the detail, real coins tend not to have designs sticking too far off the surface and it's difficult to flatten the negative design out again. Remember all of your writing and design must be mirrored (I didn't remember and had to sculpt the reverse twice. Yes, I'm a tool).

It's worth doing a cast of the coins to see how they look rather than skipping straight on to production. Popping the moulds in the fridge helped release the resin from the Fimo.

On my coins I realised the centre was raised too much and the edges were ill defined. I also wanted to make the crown on the reverse a bit sharper so I dived back and resculpted some areas.

The next set of casts looked a lot better, so I sanded the backs down and joined them together with a dot of glue. I filled the edges with putty and made sure there were no gaps before making the master mould.

I also added an oil clay (sulphur free or the silicone won't set) sprue to the coin. The sprue will end up as the pouring hole so best to get a good taper on it.

The master coin was mounted on a block of foam board and around this I built walls of yet more foam board, allowing plenty of thickness for the silicone so it would have some structure and filling any gaps with hot glue as I went. 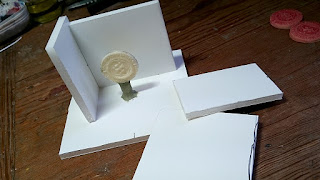 Once this was all set I mixed up some silicon rubber and filled the mould, pouring from a height into the corner of the box. Tapping on the box loosens any air bubbles that may have formed on the surface of the coin.

The silicone was left to set for 24 hours, which was probably a little excessive but better safe than sorry. I then removed the silicon block from the foam board box and trimmed the edges to neaten it all up. 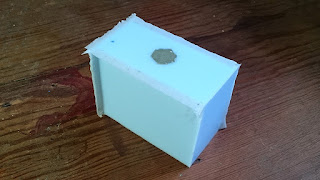 To open the mould I started cutting in from the pouring hole. This ensured I found the coin in the centre of the block. I cut wavy lines down the outside edges to ensure alignment when the mould was closed.

Genuine gold was a little out of reach for me however I thought brass powder could be used achieve a suitably metallic finish. I dusted the mould lightly with the powder, shaking out any excess, then sandwiched the silicon block between a couple of boards, securing it all with two elastic bands. The boards help distribute the pressure across the silicon and prevent any pinching or distortion of the mould. 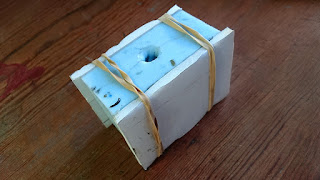 Next I mixed up some polyurethane resin. I used a plastic spoon to measure out the tiny amounts of resin I required, then mixed in an equal amount of brass powder. I also included a couple of drops of black dye so any unpolished areas would look a little grimy.

Having given the resin another quick stir to make sure the metal powder was suspended in the mix, I poured it into the mould, being sure to give the mould a tap to release any air bubbles. No photos of this part I'm afraid as I was all gloved up and getting messy. 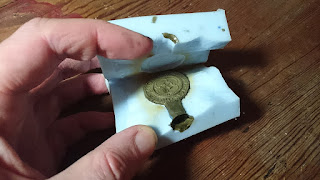 After waiting an hour or so I demoulded the resulting coin. 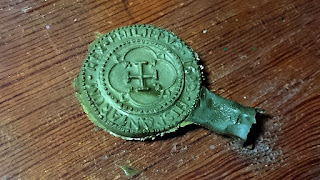 The final stage was to give the coin a quick polish. Although I've tried a few methods for this, the most natural results have come from rubbing the coin face down on a scouring pad. Using wirewool on such a small object is really fiddly, a wire brush leaves marks across the surface and polishing with a Dremel resulted in the coin looking too clean and shiny.


This process produces some pretty effective and hard-wearing coins. The tarnished finish looks quite authentic and they have a bit of weight so they're quite satisfying to handle. It might be nice to get some really shiny gold ones but I think it would be necessary to add a coating to achieve this... although whether that's spray paint, rub'n'buff or some kind of plating process I've not really considered.

Of course this would work just as well for any coins you can think of, whether that's Harry Potter Knuts and Galleons or Dwarven coins from a dragon's horde. Just stay away from legal tender, that stuff will get you in trouble ;)
at April 11, 2016