Revisiting the Crown of Bethmora 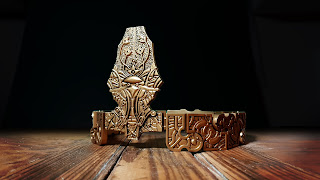 Five years ago I produced a copy of the Crown of Bethmora (from Hellboy 2). In fact, it was the first original project I'd produced using my 3D Printer. In the Autumn of last year I was contacted with a commission to produce another crown. Since my first attempt I've picked up a few tricks, (and also the Art of Hellboy 2 book) so I was pretty sure I could produce something really amazing this time around, but this particular project was not all plain sailing...


The additional complication with this build was that this was intended to be used as a costume piece but I would be unable to meet my client for a fitting. This meant that whatever I came up with was going to have to be to be flexible to some degree.

Before I started I sat down and tried to figure out what processes I was going to use. I knew the crown was made up of 18 repetitive parts, plus a front and a back piece. The first crown I made was entirely 3D printed but after five years of printing experience I knew sanding and prep-ing 3D printed pieces is a time consuming task. I wanted a really high level of finish and time was limited so I decided in this instance I would prototype on the 3D printer, invest time finishing the bare minimum of parts then mould them and pull castings. This had two additional benefits: in the event that I screwed up I wouldn't lose all of my progress, and there would also be the possibility of me selling more crowns further down the line.

I also had to consider how I would join the pieces together. I began researching hinges and linkages and started to compile a fairly impressive collection of odds and ends. My initial plan had been to use armature wire to connect the sections, allowing some rigidity and pose-ability but I still preferred the idea of a mechanical link that allowed the kind of movement seen in the film. A flash of inspiration hit me one night as I lay in bed and I ordered a box of Threaded Standoff Spacers. If implemented correctly these would allow horizontal rotation but using a vertical hinge. Perfect!

Returning to my original model I had to decide how much was still useful and how much I had to rebuild. I had a hat size from my client so I knew I needed to make the overall perimeter approximately 58cm. After quickly adjusting the proportions of the model to match my new reference material I scaled up the crown to its new larger size. Knowing now that I had to fit a 2mm rod into the parts for the hinge I had to make them thicker too, although looking at my new reference material this looked like an improvement over the original.

With the parts modelled it was time for some test prints. My first attempts to print the pieces vertically for better detail met with failure so I stuck with horizontal prints.

I had to tweak the design a few times before I managed to create parts with holes in only the places I wanted them. I doused the finished prototypes with filler primer then set to sanding.

Once they were smooth and clean I gave them a coat of gloss black, stuck them to a board, filled any gaps with clay and poured some silicone over them. 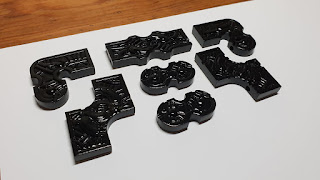 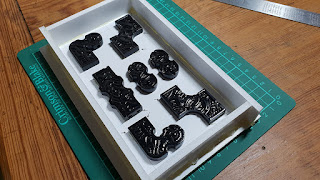 The mould was not without its challenges. Obviously there are some deep holes in place for the hinges to be inserted, and despite tipping the mould every which way as it was curing I did end up with one of the parts trapping some air.

Next I set to pouring resin in the new mould. I've had very little success with two part moulds and I thought a flat back on these pieces would mean I could get away with a one part mould. In actuality the quality would have been greatly increased if I'd made a little more effort here and gone for a two parter. Hey ho, we'd committed now...

Since I wasn't busy enough with all of this, for some reason I'd come to the conclusion I needed a really fancy box in which to present the crown. My initial plans involved creating a case inspired by the toothfairy box... which I soon realised was going to be unreasonably heavy to ship, but not before I had constructed the majority of it, inserted hinges, built a router jig for my Dremel and designed & prototyped a fancy latching mechanism.

After I came to my senses i went and bought a light weight ready-made box from Hobbycraft and gave it a nice coat of varnish.

It took a few days but eventually I'd pulled enough decent bubble-free parts to put together a whole crown. A quick measure confirmed everything was going fine with the overall size at 58cm.

The down side of the one part moulding was that I then needed to sand the back of each individual part in order to make it perfectly flat, and this without going too deep and exposing the holes moulded into them. In order to perform this fiddly task without losing my fingertips I constructed a small jig from MDF, filled it with clay and used it to hold individual parts as I pressed them against a belt sander. 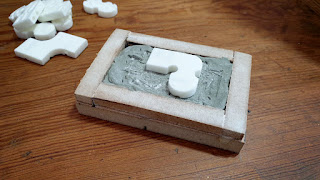 I've been chasing methods of reproducing a really convincing gold for some time and have been following a fantastic thread on the RPF about this subject. Based on information from this thread and filled with enthusiasm I acquired some Alclad Chrome and coloured candy coats. First step was to get everything glossy and black. So far so good. Next I airbrushed on the Chrome which went... OK I guess? It looked shiny but a little dark. Finally I gave it an orange candy coat... which blobbed and ran and created orange streaks. Overall not hugely successful, but time was ticking so I pressed on. 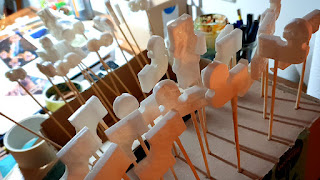 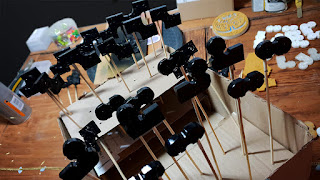 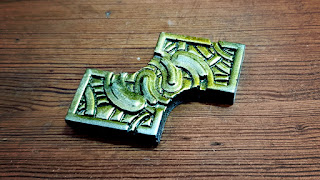 I'd been having doubts about the linkages and the possibility they would trap and pull hair. My solution was to revert back to the armature wire I'd originally intended to use... however once the crown was all constructed I encountered two problems:

Firstly, the wire was not strong enough to hold the crown straight. This meant it had a strange bowed shape when sat on my head.

The second, and more worrying problem, was that this crown fit me perfectly. Why would that be a problem you ask? Well, My client's head was a good 5cm larger than mine. Bugger. 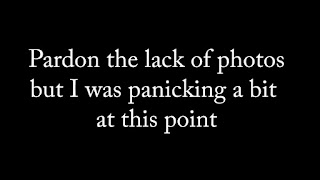 So I went back to the beginning and measured the length of the parts, and the overall length was correct! What the?! After some frantic measuring I managed to work out where the problem lay. It turns out that if you measure the inside and the outside of this three dimensional shape there is a variance of almost 8cm! Basically, the thickness of the parts affects the final circumference of the crown. Double bugger. All of the parts had been made, finished, moulded, cast... there was no wiggle room!

There was only one thing I could do: make one link longer to compensate. The piece at the back of the crown seemed like the obvious candidate. I quickly printed a new piece, primed and sanded it and knocked out a casting. My first thought when I saw the piece in the crown was that a long straight section looked a little odd. Thankfully I discovered that heat can be used to deform this particular resin so I set to with a hot air gun and gently formed the piece over a mug to add a gentle curve.

With all of these disasters playing out I decided that rather than modifying my bendy, orange blobbed crown it would be best to start over. Luckily I had enough cast pieces put aside that I could make up another crown fairly swiftly. I used a rattle-can gold rather than messing about with Alclad and sealed it with a clear coat. A gentle weathering with black paint added a little definition. I glued the standoffs into place, taking care to adjust them so they wouldn't screw tight when each piece hinged.

The front and back of the crown was hinged horizontally but the barrel hinges I had acquired left too much space between the segments when fitted. I resorted to wire for these connections which did the trick.
This time everything went smoothly and I was happy with the result. With the crown finished I just need to make the inserts for the box to keep it safe when it was being shipped. I'd recently watched a Youtube video on lining cases with foam padding so I'd got a clue what I was doing. 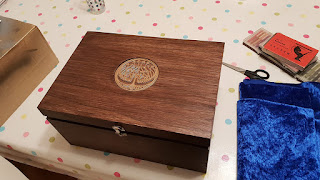 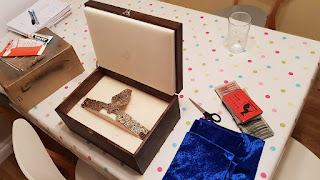 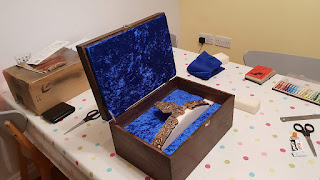 A couple of evenings work and two tubes of contact adhesive later and the crown was complete and ready to ship! 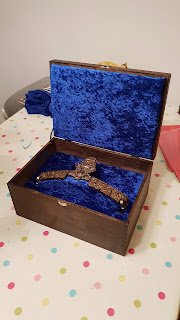 If I'd had more time there are quite a few things I might have liked to do differently. Obviously I would like to have remade the crown slightly larger rather than extending the back piece and I was not 100% satisfied with the gold. Really I needed more time to experiment with different finishes. If there had been a bit more money in the job I might have considered a home plating kit as that would have been really fun. It would also have been really nice to bring my original plan for the box to life but at the end of the day I was being paid for the crown not a box. Overall I think things worked out and the client was happy with his crown. Hopefully when the costume is complete I'll get some pictures I can share with you. 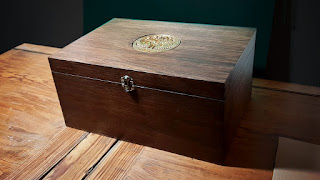 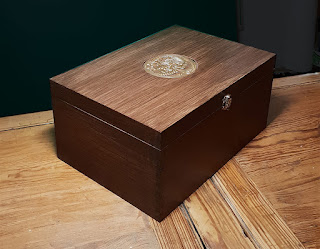 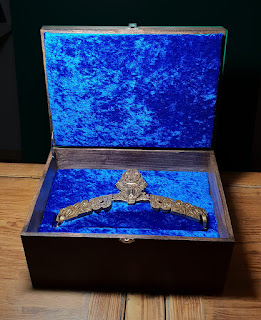 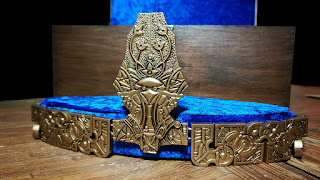 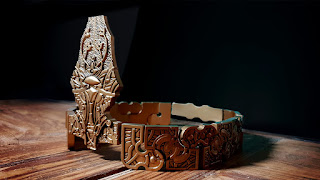 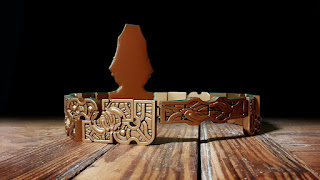